2019 BUDGET DEAL WILL PUMP UP DEFICIT

The WSJ reported today that “Federal deficits are projected to grow much more than expected over the next decade after a budget agreement struck last month.”

The CBO Director said, “To put it on a sustainable course, lawmakers will have to make significant changes to tax and spending policies—making revenues larger than they would be under current law, reducing spending below projected accounts, or adopting some combination of those approaches.”

You probably recognize that his quote sounds very similar to David Walker’s in The Power of Zero documentary.

The CBO says we will see deficits total over $12.2 trillion over the next decade.

However, the CBO often understates reality.

For example, Google the CBO 2008 Report. On page 10 you’ll find this chart which projected the debt as percentage of GDP (Debt to GDP) trailing off to somewhere in the 35% realm by now, where our reality according to today’s WSJ report by the current CBO Director, Phillip Swagel, says we can expect it to rise from 79% to 95%. It’s hard to see how 35% projected a decade ago squares with 79% today. (Yes, that is a much smaller percent than the economists state is reality today, but what I want to do here is just measure the CBO’s projections which their own accounting of what is happening right now). 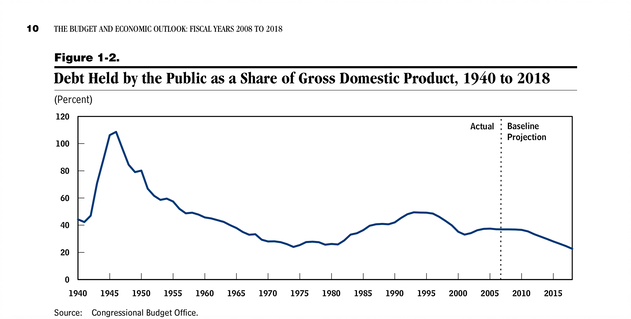 The next chart is even worse on page 11. It projected a surplus of $109 Billion instead of what the WSJ reported today: “Higher deficits have also led the government to ramp up borrowing over the past two years: Treasury estimated it will borrow more than $1 trillion in 2019 for a second year in a row.” So in just over 1 decade we have seen the CBO’s projection vs. reality go from a surplus of $109 Billion to a deficit of $1 trillion, and a projected Debt to GDP go from 35% to 79%. We should all be freaking out right now.

We must assume that today's CBO projections understate reality of what will happen over the next decade.

Why?  Our politicians seem to operate in fantasy land.  We see most of the Democratic candidates talking about free college and Medicare for all, and President Trump so far this week has floated the idea of cutting more taxes and buying Greenland.  Our fiscal outlook is on an unsustainable course.  Eventually we will have to come out of fantasy land and deal with reality.

Are your clients ready for what is coming?  Is our country ready?  The message in The Power of Zero documentary must break through.